Best Doctors is part of the Teladoc® family of brands, providing the right care when you need it most. 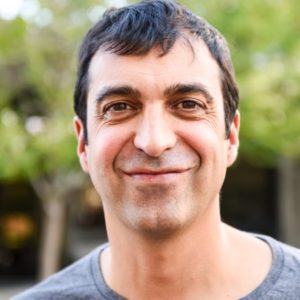 Michael saw his primary care physician (PCP) for an annual physical exam, the same doctor he had seen for 20 years. His PCP found an abnormality during the prostate exam, and Michael clearly saw the concerned look on his doctor’s face. Michael was immediately referred to a urologist who ordered a biopsy. Three days after that appointment the phone rang and the urologist asked: “Are you sitting down?”

The urologist told Michael that he had one of the fastest growing and aggressive kinds of prostate cancer. Shortly after that, Michael underwent surgery to remove the cancer. The team got as much as they could, but because of its aggressive nature, the cancer had spread to other parts of Michael’s body.

With his local doctors, Michael started a course of monitoring, with tests every 3 months. Before his surgery, Michael had gotten the prostate-specific antigen (PSA) test, but this had not shown signs of cancer. It was only after the surgery that tests showed his PSA levels rising, which, according to Michael’s doctors, meant that the cancer was continuing to spread in his body. His doctors continued to recommend monitoring and waiting, but Michael was concerned. “You don’t know where to turn. You don’t know if what you’re doing is right,” he said.

Michael said that it was a coincidence that he received a mailer from Best Doctors, a free and confidential benefit provided by his employer, which provides expert second opinions for members. “It came at exactly the right time.” He thought that someone was looking out for him.

“Their goal was my best care. I feel like Best Doctors helped save my life.”

He contacted Best Doctors right away. The Best Doctors staff promptly collected Michael’s medical records and identified a leading expert in prostate cancer to review the case and deliver a detailed report. Michael was even able to speak directly to the expert, who addressed his long list of questions.

The expert confirmed the diagnosis, but rather than waiting and monitoring, he recommended a course of radiation to treat the cancer. Michael also asked if a new urologist at a local medical center could administer the treatment, and the expert confirmed that this would be the best path forward.

Over the following few months, Michael underwent 45 radiation treatments. “I had good days and bad days and the Best Doctors nurse would call and a bad day would be a good day,” he said. Halfway through the course of treatment Michael experienced sickness from the radiation, but he said that the Best Doctors team was there to reassure
him that he was on the right course.

Michael said, “Everyone I spoke to was absolutely wonderful. They were all very understanding. You couldn’t ask for better people. All along the way they checked in on me. They offered me all kinds of assistance.”

One year and several follow-up tests later, Michael said there are no signs of cancer.

Michael reflected on his Best Doctors experience, saying, “Their goal was my best care.” He’s since told his wife that receiving the mailer about Best Doctors was divine intervention. “I feel like Best Doctors helped save my life.”